We took a look at the state of Bristol’s housing market back in 2016 and again in 2017 so we thought it about time we took a fresh view, especially given today’s uncertain times.

According to research by property company JLL, Bristol is expected to experience higher-than-average house price and rental growth than the British average over the next five years, including London.

During 2018, the value of a typical two-bedroom apartment in Bristol rose by 1.8 percent to £290,000. Whilst prices in Bristol have followed the rest of the south and south east of England and dipped a little during 2019, the general trend is firmly in an upward direction, with prices increasing by almost 60% over the ten years from August 2008 to August 2018. 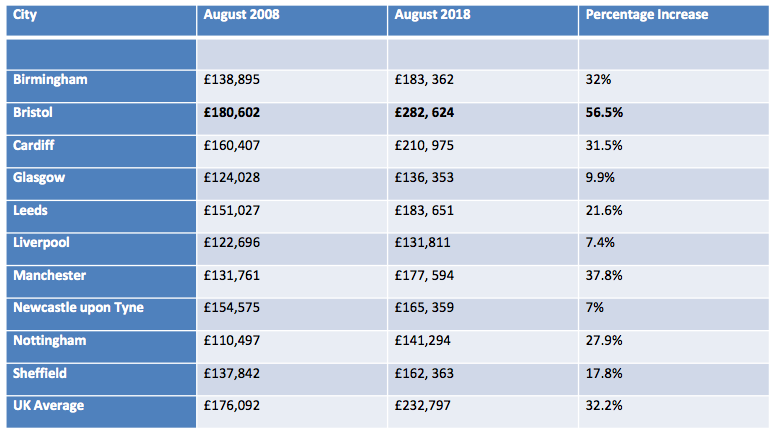 Rental prices in Bristol are also outstripping the national average. The JLL report found that monthly rent amounts in the city are expected to increase by 3.1% over the next five years, compared with an average of 2.4% across the rest of the UK.

Of course, so many predictions for future growth, however slow, could change if the UK ends up crashing out of the EU with no deal, at least in the short term. The Bristol Post reported in September that a No-Deal Brexit could cause house prices in Bristol and the south west to tumble by 5.9%, which could be good news for first time buyers but worrying for those hoping to sell up soon. If a withdrawal agreement is reached house prices are expected to grow approximately 0.9 percent in 2020, meaning Bristol will retain its place as one of the most expensive places in the UK to buy.

So, Brexit aside, what exactly has caused this house price boom and why is Bristol such an attractive place to buy or rent property?

A desirable place to live

Bristol has received many awards in rent years, including being named the best place for under 26 year olds to live outside of London, and topping the Sunday Times Best Places to Live Guide in 2017. Sunday Times editor Helen Davies said: “The city is a worthy winner thanks to its ideal combination of extraordinary culture, impressive schools, buzzing culinary scene, exciting redevelopment and community spirit. We sum the city up as cool, classy and supremely creative.”

Bristol is also an attractive place to live due to its proximity to London, with many people who have been priced out of the capital’s housing market making their way to Bristol and snapping up houses at relatively lower prices. Along with pushing up property prices, this has had the effect of driving up rents, with prices in Bristol second only to those in London. 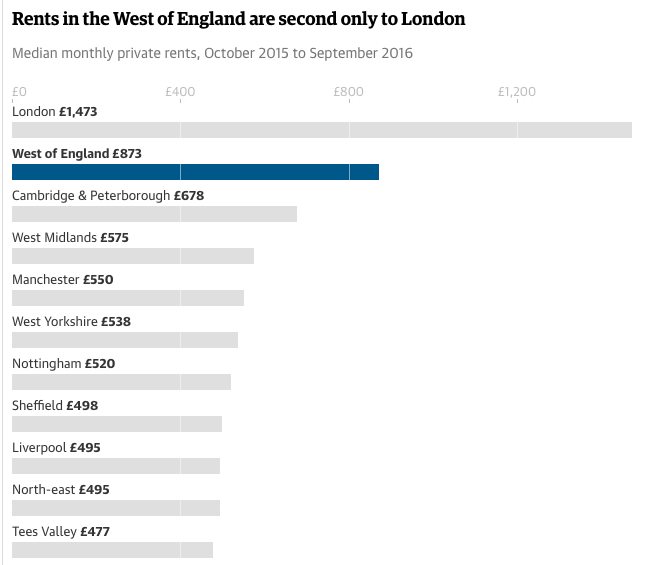 James Petherick, residential development director in JLL’s Bristol office said: “Bristol continues to pick up accolades for desirable city centre living – so it is no surprise that demand for housing continues to rise. Despite several new city centre schemes on the horizon… we see demand continuing to outstrip supply over the next five years leading to significant increases in rental values and house prices.

New schemes such as the creation of build-to-let developments will help plug the gap, but Bristol’s planners and developers need to think creatively and flexibly if we are to build sufficient homes to meet demand.”

How do different areas of Bristol compare?

Whilst housing in all areas of Bristol is more expensive than the national average, some areas are rising in price quicker than others. According to Zoopla, the best performing postcode is BS5, which consists of Lawrence Hill, Easton and St George. Prices have increased in these areas by 2.72% or £6,345 on average in the last 12 months. St George, in particular, is seen as an up and coming area and is proving to be a draw for young professionals and young families getting on the housing ladder for the first time.

Elsewhere, areas in the postcodes of BS10 – Southmead, Henbury and Brentry – and BS15 – Hanham, Woodstock and Kings Chase are seeing price rises of about 2.5%. Areas seeing the least hike in prices are BS48 – Blackwell, Nailsea – and BS9 – Stoke Bishop, Westbury-on-Trym, and Henleaze.

Rental prices in Bristol also differ depending on the area you want to live. As of 2018, the average rent for a one bedroom flat in Bristol was £795pcm, with the city centre, Montpelier, Redland and Cotham being the most desirable, and most expensive places for renters to move to.

At the cheaper end of the rental market are Fishponds, Southmead, Easton and St George. Rental prices in Bristol saw a 32.5% rise between 2013-14 and 2018, demonstrating just how popular the city has become. The rising student population in the city, who account for a third of the rental market, is also driving prices up even further.

For a locals guide to the different areas in Bristol, read our guide on moving to Bristol.

There are plenty of new schemes in the works in Bristol, including the Winterstoke Development and Broadwalk Shopping Centre Redevelopment in the south of the city and the continued regeneration of the popular Wapping Wharf area in the city centre. Most of these developments include affordable properties, enabling people on a lower income to live in some of the most desirable areas of the city.

The People for Places Group development in St Pauls is a good example of how previously derelict areas of the city are being transformed. The planning applications include 230 homes, offices and retail spaces to be built on land just off the M32, unlocking a £55m investment on the site and creating a significant number of jobs. Also in the pipeline is a new housing development in the Cumberland Basin called ‘Western Harbour’, which will be a mixture of new homes, retail spaces and leisure spaces.

The question is, will providing more housing in Bristol bring house prices down again? It seems unlikely. The average salary in Bristol is £27,400 and the average house price £304,900, which is 11.1 times higher. Demand is still far outstripping supply, which means that despite huge investment being put into new developments, prices are unlikely to fall any time soon. Whilst this isn’t great news for first time buyers, it will be welcome for those who are already on the property ladder, especially people thinking of downsizing or moving out to a more rural area on the fringes of the city.

If you can afford to buy in Bristol, it’s a great investment that should, according to the market forecasts, get you a great return, whether you’re able to buy in an expensive area like Clifton or a more affordable part such as St George. Bristol’s fortunes look set to only get better, for example with Channel 4’s new creative hub set to open at Finzel’s Reach within the next year or two, which means that it’s already buoyant housing market is set to boom bigger than ever.

Are you moving house in Bristol? Get in touch with us for an efficient, affordable and friendly removal service. Or, if you’re thinking of relocating, either within the city or further afield, check out our handy guide to selling your home in Bristol.