Two major housing developments are coming up in South Bristol: one along Winterstoke Road and another at Broadwalk Shopping Centre in Knowle. The Winterstoke development aims to provide more affordable housing through 67 dwellings and is already approved, while deliberations are still ongoing for the Broadwalk Shopping Centre proposal, which plans to convert the carpark into 400 flats on the Wells Road, between the junctions of Broad Walk and Redcatch Road.

Affordable housing in the form of 59 flats and eight homes will soon be built along Winterstoke Road. The housing site encompasses the Winterstoke Garage along with the buildings and yards of the Kellaway Building Suppliers. In order to accommodate the new housing, these existing buildings will have to be demolished.

The site is surrounded by three roads: Winterstoke Road, Luckwell Road, and Lynwood Road. Accordingly, three flat blocks will be put up, named after each of these roads. The three-storey Winterstoke Building is the smallest, with a 2-bed flat at each storey. In contrast, the Lynwood Building has five storeys with a total of 43 1-bed and 2-bed flats, while the Luckwell Building’s 4 storeys will contain 13 flats. Aside from these, there will be eight terraced houses facing Luckwell Road. All in all, these add up to 67 living spaces.

A major concern, though, is that the vehicles are often loaded and unloaded at the Winterstoke Centre, and this might block residents from accessing their homes. Another is noise generated by companies nearby since the surrounding area off Winterstoke Road to the south and west is mainly used for industrial purposes. Potential residents are also hoping that the tall Lynwood Building won’t block the light for the other flat blocks.

Despite these, members of the development control committee are heavily in favour of the project because of its sustainability and contribution to affordable housing. These concerns are very much legitimate, but their stance is that it’s up to the developers and the Winterstoke Centre to strike up a compromise.

The benefits outweigh the costs though, especially since the development’s location is very convenient for walking and cycling, and it’s close to a bus route and a train station. Bishopsworth councillor Richard Eddy said, “It would be impossible to find a more sustainable site,” and St. George Troopers Hill councillor Fabian Breckels added that it was an “absolute jackpot.”

In comparison, the Broadwalk Shopping Centre redevelopment is a much larger project, costing an estimated £100 million. This will be located on the corner of Broad Walk and Wells Road. Essentially, the shopping centre’s multi-storey carpark, as well as the back part of the centre, will be demolished in order to make way for around 400 one and two-bed flats. 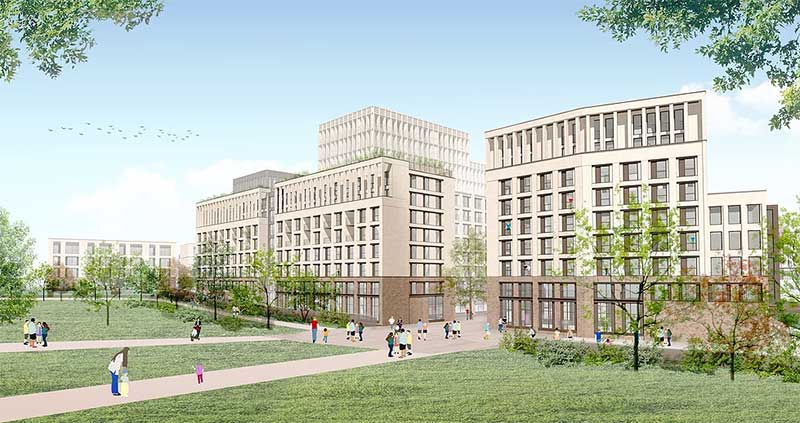 The envisioned scheme is mixed-use, with the shopping centre being redeveloped with a lot of the original shops staying put, as well as new cafes, and restaurants to accompany the flats. The new carpark will have 430 spaces for both residents and shoppers. For convenience, a path will connect the shopping centre’s main Wells Road entrance to Redcatch Park at the other end, with the new piazza opening up directly onto Redcatch Park.

The main objective behind this is to revitalise the Broadwalk Shopping Centre, which went into administration in January 2017. Redevelopment may be costly, but it’s about time that this shopping centre was redeveloped, not least because the car park has concrete cancer and could be shut down at any time (shoppers have also complained of overly small spaces, with some receiving tickets from a parking enforcement company for not being able to park within the lines at the car park).

By redeveloping Broadwalk into housing and shopping, the shopping centre will attract more traffic, and shopkeepers, who are already seeing declining footfall, will ultimately benefit. The redevelopment will take around two years, but this will occur in phases to minimise disturbing retailers. All throughout, people can still visit the shopping centre as normal.

In July 2017, a public exhibition and preview of the development was set up for retailers and people living. Aside from disseminating information about the project, the preview was also useful for gathering feedback. Many were worried that Redcatch Park might be affected, but developers were quick to assure that the park would be untouched. Discussion is still underway, with negotiations being made about factors such as the height of the new flats. Even as opinions remain mixed, this is the most viable solution for repurposing the car park.

Over the coming years, there will be some changes in Bristol housing as city planners double down on sustainability and affordability. These two developments at Winterstoke and at the Broadwalk Shopping Centre will take some time to complete, but South Bristol can look forward to more options for housing in convenient locations.