Soaring house prices, rising rents and an influx of people moving to the city from London are putting the squeeze on those trying to find an affordable place to live in Bristol. Due to demand for housing far outstripping supply, developers and Bristol City Council are being challenged to come up with innovative approaches to finding a solution to the housing crisis.

Here are five ways homes in Bristol are being cleverly reimagined.

Swedish furniture giant IKEA are the masters of flatpack furniture, and now they are extending that expertise to homes. Bristol City Council has agreed to work with a housing developer co-owned by IKEA to build 200 homes on a council site off Airport Road in south Bristol. The company is BoKlok and is jointly owned by the retailer and construction firm Skansa, which specialises in factory-built housing that can be constructed at low cost.

The 200 homes will be built to the east of Filwood Green Business Park, with 140 being for sale under the BoKlok brand and the rest being available for social rent and shared ownership. Bristol City Council has agreed to dispose of the site to BoKlok and, subject to planning permission, construction could begin as early as autumn 2020. Bristol mayor Marvin Rees said: “At the [Bristol Housing] festival’s launch a year ago, we said we would invite ideas from all over the world and be imaginative in solving the city’s housing emergency. This is exactly what BoKlok will bring with these exciting plans.”

If there’s no space to build outwards, the best solution is to build upwards. Bristol City Council has seen the sense in this approach and has agreed to fund the building of an apartment block on stilts above an already existing car park in St. George. The block will consist of eleven flats, called ZedPods, which will be built on a raised steel deck above Chalks Road car park. The parking bays beneath would remain for public use. 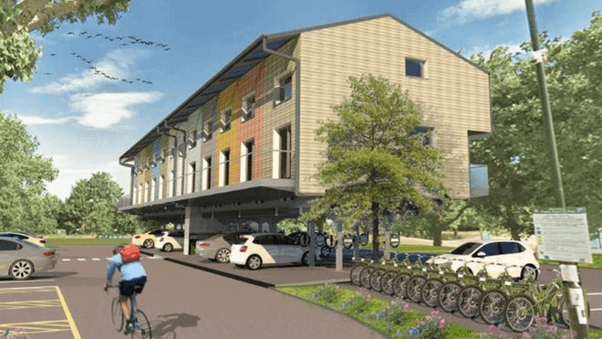 The development is being trialled under the banner of the Bristol Housing Festival, which is a five-year programme launched by Bristol City Council to look at new ways of providing homes to people who could not otherwise afford them. The ZedPod apartment block is part of a scheme to help disadvantaged people find homes, and would act as transitional accommodation for 13 young people aged 18 to 25, who are on low incomes or making their first steps into independent living. 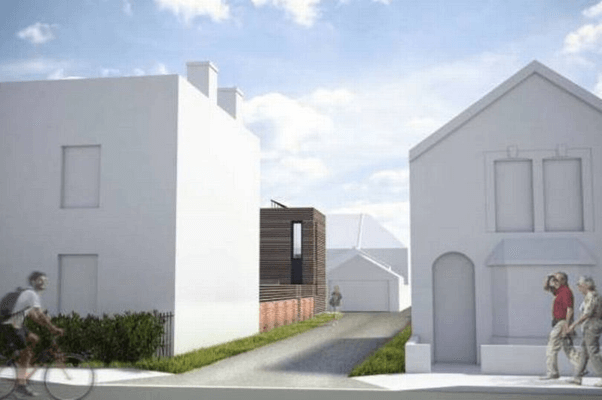 Another way Bristol City Council is tackling the housing crisis is by allowing ‘tiny homes’ to be built in the city. Until recently the council’s planning policy didn’t allow the building of new single-occupier homes, because local authority recommends that at least two bed spaces should be available in a home, as well as room for additional visitors. However, proposals for three tiny one-bed, one-person homes have been approved in the Hillfields area of north-east Bristol.

The plans include dividing an existing two-storey Victorian property into two flats, with a new prefabricated pop-up ‘Snug’ home to be built in the rear garden of the house. The ground floor flat, first floor flat and prefabricated garden house all measure between 37sqm to 44 sqm, meaning they meet or exceed the minimum internal floor space requirements demanded by UK housing standards. Each home has a small grassy space to enjoy, and two of them will have patio areas as well.

Though only one ‘Snug’ home has been given planning permission so far, it seems like a viable option for innovative housing Bristol and more will surely be on the horizon.

Houses on stilts in Fishponds

Also to be built above an already existing car park, but this time in Fishponds, is a ‘houses on stilts’ project. LaunchPad is a mixed community housing scheme set up for University of Bristol students, young people who have been at risk of homelessness and key workers. The project was inspired by modular housing schemes in Amsterdam, which sees refugees and young people housed in a special development of container housing. The ambition of the Bristol project is ‘to bring young people together to build communities and futures’.

LaunchPad consists of 31 one-bedroom apartments with shared communal space as well as a laundry, secure cycle parking and a bin store. The apartments are arranged over three storeys, which are all accessed off a covered walkway. Each apartment is self-contained with a small kitchen/dining area, a bedroom and a bathroom. Ben Piling, acting chief executive of Bristol Student’s Union, said of the scheme: “We’ve enjoyed welcoming our first cohort of tenants in September and hope this will pave the way for other unique accommodation options… The people living here are a mix of students, with young people who haven’t been to university, along with local key workers, ‘with an onus on community engagement’.”

Knowle West Media Centre (KWMC) is an arts centre and charity that has been based on the Knowle West estate in south Bristol since 1996. KWMC works creatively and collaboratively with the local community to develop new models for social change and has a diverse range of programmes exploring everything from health to housing. KWMC launched a project called We Can Make as a ‘bottom up’ response to community demands and concern about housing need in Knowle West. The project has created an approach that it calls ‘urban acupuncture’ where people opt to use a very small piece of land within a development to meet their housing needs.

KWMC worked with designers to build a prototype home made from timber and compressed straw on a micro-site within the community. After testing the prototype and identifying more sites, the first batch of homes of homes will come to planning in early 2020 and up to 16 homes will be built over the next eighteen months.

Though housing within Bristol is scarce, there are some great ideas in development that will help ease the pressure and make it easier for people to find a home where they choose. With a bit of creative thinking, Bristol will continue to be a vibrant, attractive and affordable place for people to live.